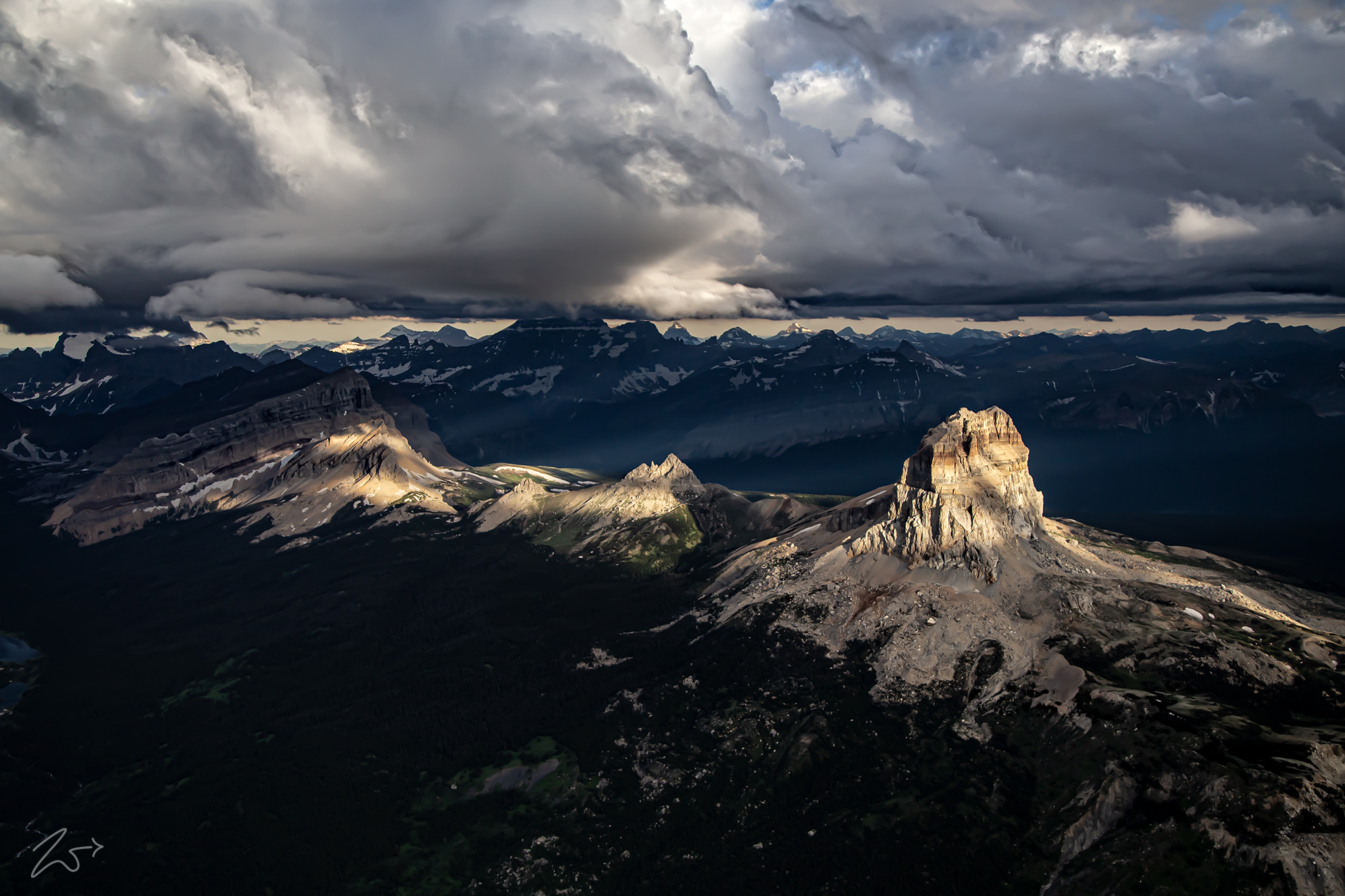 Chief Mountain has been a towering territorial landmark and sacred place for vision quests and other traditional ceremonies for many different First Nations Tribes over thousands of years. There is an unknown number of First Nations burial sites around the base of this iconic mountain, dating back eons. Called Ninaiistako by the Nitsitapii (“real people”), collectively known as the Blackfoot, it is part of their ancient history and is included in many creation stories.

The summit of Chief Mountain remains the most acclaimed vision quest site in Montana.  It is revered as being home to the Thunderbird deity.  And according to the Blackfeet legend, the butte-shaped mountain is in the “Center of the World.”

To its immediate left in this image, lay the small peaks of Ninaki, and to the left of that, Papoose. These three formations are part of a story from long ago…
“A beloved War Chief lost his life in a battle with another tribe, when his wife was informed of this she became consumed with grief and sadness. One day she took their small child to the mountain summit… then threw her child and then herself from the mountain top. Ninaiistako is the War Chief, Ninaki is his wife and Papoose is their child.”
Legend says that if you look closely at the face of the mountain, you can see the figure of a woman with a baby in her arms.

In another story, Chief Mountain was the only land left unsubmerged after a great flood covered the earth.  From this towering mountain, the Creator made the present earth and is the source of creation for all the two-legged human beings.

It is said that, over time, many brave warriors have climbed this holy rock formation carrying buffalo skulls on their backs to make offerings with.  These offerings were made in important ceremonial practices that saved the people, and to this day ancient buffalo skulls can still be seen in the offering sites.

This stunning scene was filmed by Zedekiah from his bush plane early one June morning. Flying across the prairie on the boundary between the First Nations Blackfoot lands and Glacier National Park, he timed the arrival of sunbeams as they spread across the grasslands until they reached the Rocky Mountains front range… and took the photograph when the beams finally came to rest upon Ninaiistako, Ninaki, and Papoose.

The image was taken from a moving aircraft, as Zedekiah piloted the aircraft while simultaneously operating the camera. It was taken in unusual atmospheric conditions with a combination of low-hanging cumulus clouds and early morning sunbeams that are both very unique and difficult to predict. These beams of sunlight pierced the clouds, illuminating the formations in a beautifully candescent manner. Lastly, it is impossible to simply walk up a trail and take the same photograph again. This image was very difficult to create, and is truly one-of-a-kind, therefore making it extremely rare.

Due to the rarity of the image, it is being offered either as part of a numbered and signed, reserved-limited edition of ten (10) prints.

There are three (3) artist proofs available.

This image is best suited for Satin Metal with a lustrous flat, non-reflective finish and is available for additional custom texturization to produce enhanced micro shadowing across the surface of the print.

Contact Zedekiah Gallery to speak with an art consultant about purchasing a limited edition print of this image.